The Khadoran Empire, commonly known as Khador is one of the Iron Kingdoms of Western Immoren, located north of Cygnar and west of Rhul.

Modern Khador draws its roots from the ancient Khardic Empire that existed prior to the Orgoth Invasion. It was a major participant in the rebellion against the Orgoth, and helped create the colossi used against the occupying forces. The Kingdom of Khador came into being after signing The Corvis Treaties with the rest of the Iron Kingdoms, which created the modern nation-states in Western Immoren. Khador is a major military power and is currently at war with most of its neighboring states.

Like the stones holding up the fortress, Khador’s massive military is built from its citizens. Every capable Khadoran is added to the list of possible conscripts—if he does not enlist on his own, of course. The enlisted majority become Winter Guard, the backbone of the Khadoran military. Some survive and graduate to higher roles such as the prestigious brotherhood of Iron Fangs or the imposing Man-O-War Shocktroopers who fight alongside the most powerful warjacks in all Western Immoren.

The massive armies of Khador personify their principles: strength and resilience over all. They are trained to smash an enemy’s defenses with determined strikes, but are more than ready to dig in their heels and outlast any force in a war of attrition. They are glorious to behold as they march, often hundreds deep, flanked by titanic Warjacks that shake the ground with each step. Many conflicts have been subdued without a single casualty when such a force marches into the area as their reputation marches with them.

The queen commands Khador’s legions through her High Kommand. This group of venerable career soldiers have defied the odds and retired from the field into prestigious positions. They lead not from behind a cannonade on the battlefield, but from the great war rooms of Stasikov Palace in Korsk. Although they defer to the queen, who reminds them by directly commanding their officers when called for, they are the main battle proven minds that have her ear at all times.

Khador is home to thick forests, grand mountains, and vast plains, and is the largest country in Western Immoren. It is located on the northwestern coast of the Iron Kingdoms. Ord and Cygnar are to its south, and Rhul lies to its east. To the north lies the frozen sea. It has a harsh winter climate and is sparsely populated. 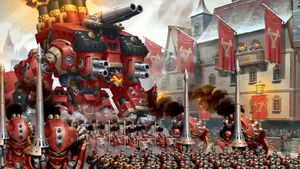 The people of Khador are fiercely independent, as is typified by a strong militaristic tradition. All citizens are trained in arms and tactics from an early age, and all able-bodied citizens are considered part of the military's reserves. The reigning empress, Ayn Vanar IX, has been known to take to the field and fight with the common soldiers. Sorcery is uncommon among the Khador, but their regiments are still well supplied with fearsome battle-magicians.

The nation subscribes to the proclivities of civil law. Criminal law is centered around the concept of harm to the Motherland. Trials are conducted by tribunals with anywhere from one (for lesser crimes) to eleven judges. Guilt of the accused is determined by majority vote of the tribunal. In more rural regions, older systems of justice are relied upon including trial by combat.

Menoth was worshipped by the Khards during the Thousand Cities Era. After the Orgoth invaded and occupied the Empire, many changed their allegiance to Morrow. However, much of the Khadoran aristocracy and citizenry remain true to the Old Faith. Those that follow the Old Faith tend to be less zealous, though still disapproving of Morrowan worship. The ecclesiastical ranks of the Old Faith parallel that of the Protectorates clerical hierarchy.

Khards - Found mostly in central and southern Khador, they make up the majority of the Khadoran population.

Kossites - The Kossites are found in numbers in northern Khador. They practice their considerable hunting skills there.

Skirovl - The people of Khador's northern mountains, They are an imposing and fearsome people, and are known for their profound piety.

Umbreans - The Umbreans live in eastern Khador, towards the Llaelese border. Most are looked down upon as traitors due to the rulers of Umbrey willingly becoming part of Llael following the Border Wars. Some Umbreans, however, are hailed as paragons of the Khadoran spirit. Vladimir Tzepesci being an example of that. 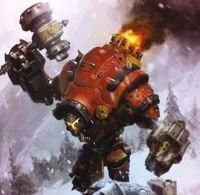 Khador harnesses steam to power its mighty rail system and hulking Warjacks. They pride themselves on their feats of engineering and heavy industry as much as their people's steadfastness. The nation-state's unrelenting desire to become the industrial power of the Iron Kingdoms has blackened their skies with smoke and soot, and threatened its traditional ways.

The steam engine was introduced in the 740s BR by a Khard engineer named Drago Salvaro. He had no inkling that his invention would change everything, and that his name would be known for millennia. His invention is now used throughout western Immoren to power ships, steamjacks, and locomotives. Another proud invention of the Khador Empire is the Korsk-Skirov line, the first rail system of its kind. It was completed in 487 AR, and first locomotive to traverse its rails was the Korska. Blaustavya Shipping and Rail is now the largest rail company in Khador.

The Khadoran Institute of Engineering, located in Korsk, is the foremost research institute the fields of clockwork, hydraulics, steam power, metallurgy, cortex construction, and mechanicks.