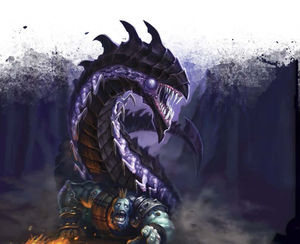 The naga, or nightlurker in the Morrdhic language, are fearsome, worm-like dragonspawn that precede the hosts of Everblight's legion on the ground. Though seemingly simple in form, the naga are in truth complex spawn representing Everblight’s genius in the manipulation of blighted flesh.

The naga were among the first forms Everblight crafted in the time of Morrdh. Ancient texts from that period refer to the 'worms of the earth' that devoured the enemies of Morrdh and likened them to 'crawling shadows'.[1]

The naga's body is long, sinuous and serpentine, with a fanged maw and countless small claw-like legs allowing them to clamber swiftly over any obstacle.[1]

The naga slither through the shadows toward their prey almost like serpents and use their fanged maws to tear apart their enemies after spewing their caustic venom from a distance. The sight of comrades’ melting flesh is often enough to send unaffected foes fleeing in horror as the naga arrive to claim their feast, unnatural darkness dripping from their jaws.[1]