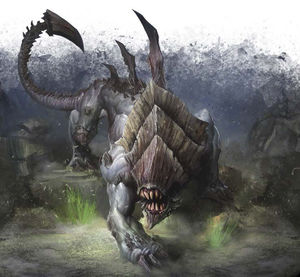 The raek is a sleek, agile form of dragonspawn created by the dragon Everblight.

The first raeks were created by Everblight when he was hiding from his father beneath the dark Kingdom of Morrdh. The rulers of Morrdh used them as grisly tools of assassination, sending them towards enemies when they deemed a straightforward death was too simple or gentle a fate. Raeks came to be feared as living warnings that no one who betrayed Morrdh would find safety, for the raeks could stalk undeterred across untold distances.[1]

After the fall of Morrdh, memory of the raek faded from the world, and the creatures gradually taking on a mythical status.[2]

After taking control of the Nyss and forming the Legion of Everblight, Everblight brings the raek back to the world and sends it forth to hunt.[1]

The raek is quadrupedal, lithe, powerfully muscled, particularly its chest and limbs, superficially similar to a big cat. Its primary weapons are long incisiform teeth and a chitinous blade at the tip of its long, prehensile tail.[2]

A raek's head and back are protected by a layer of armour plates. Its underbelly, limbs and tail are similarly protected by smaller overlapping scales. A raek's scales articulate with its body, fluidly shifting as it moves. Sharp teeth-like scales protrude from the raek's skin along the ridge of its back plates and at its shoulders.[2]

Raek legs end in broad talons that allow them to negotiate nearly all surfaces.[2]

Raeks are single-minded and patient hunters. They are able to ignore all outside distractions and knows no concern for self-preservation like a natural predator.[2]