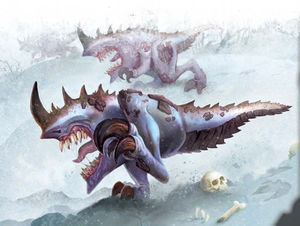 Shredders, known in the Morrdhic tongue as akriel, are the smallest and simplest spawn to arise from the blood of Everblight. Shredders are small, vicious dragonspawn known for their unquenchable appetite. The simplicity of the shredder’s design perfectly echoes its straightforward purpose: shredders exist to feed on Everblight’s enemies and nothing more.[1]

Fully grown, a shredder is several feet long from nose to tail, with most of its mass taken up by its head. The mouth is a shredder’s most prominent feature, taking up the majority of its face. Its jaws produce a relatively powerful bite force, and its widely spaced teeth have an inward curve and sharp cutting edge that allow it to pull hunks of flesh away with each bite. Shredders latch onto prey with their serrated jaws and pull away using their muscular legs, digging into flesh with hooked talons at the end of their toes. Along its spine, a row of horns protect the shredder as it feeds.[1]

Like all dragonspawn, a shredder is eyeless, relying on weak waves of blight that allow it to extend its awareness. Additionally, a shredder’s sense of smell is preternaturally acute, and its skin is sensitive to minor variations in air pressure.[1]

Shredders grow to full size with unnatural speed, and their escalating appetites drive them to add to their mass using whatever flesh they can consume. Only a warlock’s direct command can compel them to ignore their hunger. They have been employed as much for the terror they sow when let loose on unsuspecting civilians as for their effectiveness as weapons.[1]

Anything moving in a shredder’s vicinity draws its predatory attention. Natural camouflage provides no protection, and even supernatural cover has limited effectiveness.[1]

Shredder metabolism goes into frenzied overdrive upon maturity: the more they eat, the more frenetic they become, and still their appetite pushes them to consume more. This trait allows them to be released to sow terror with little guidance. Dozens of shredders might be loosed as a preliminary attack wave.[1]

Warlocks of the Legion of Everblight are able to produce shredders quickly, creating them from their own spilled blood. They are viewed as the most disposable spawn, an easily replaced commodity.[1]