From Warmachine - Lexicanum
Jump to: navigation, search
Skarre Ravenmane is the bloodthirsty ruler of the Satyxis and the captain of the Cryxian Black Fleet. From her flagship, the Widower, she coordinates the whole of the Cryxian navy as well as directly commanding the dreaded Black Fleet. For over thirty years, Skarre has carved her legend as both a ruthless pirate queen and a powerful warcaster of the Nightmare Empire. And yet for all her skill and success, perhaps the most unusual and fascinating aspect of Skarre Ravenmane is that she has achieved such a position within the ranks of Cryx as a living soul.[1] 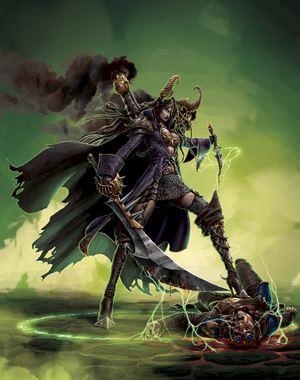 Though born to the queen of the Satyxis, Skarre received limited benefit from it. Her bloodline is famed among them, but for the Satyxis the right to lead is proven in battle and not inherited: she was required to prove herself as any other Satyxis warrior. She served for several years aboard various raider captains, where she learned the basic trade of piracy. She also began to harness her arcane talents, as witnessed in the first confirmable documentation of her activities from 573 AR.[1]

Skarre's warcaster talents first manifested around 574 AR, during her capture of the Khadoran ironhull warship KNV Ivanovich. She renamed the ship Banshee and it served as her flagship for the next several years. The capture of the Ivanovich represents the beginning of Skarre’s work to build her personal fleet with which to pursue her own agenda. Skarre continued to gain both notoriety and power through her continued raids and uncanny ability to know precisely when to attack mainland ships at their most vulnerable. Demonstrating her sovereignty over the Satyxis, dozens of Skarre's rivals died at her hands before the Satyxis recognised her as their queen.[1][2]

Skarre took an extremely active role in the terror raids during the Scharde Invasions. Armed with the Widower and her growing fleet of pirate vessels, she reaped a bloody toll on the Cygnaran Navy and coastline, striking with impunity and seemingly at random. It was during the Scharde Invasions that the name Skarre Ravenmane and the Widower took their place as tales told to scare unruly children in coastal towns into behaving.[1]

It was during this time that Skarre saw occult portents that indicated a mortal birth of a sorceress with unbridled potential. After informing her master Asphyxious of this presaged birth, Skarre was dispatched to ensure the procurement of this precious asset personally. Meeting little resistance at the Cygnaran village of Ingrane, Skarre returned with her captive, believing herself successful. The auguries had been vague, however, and she was unaware the power foretold was manifest in a pair of twins, not in a single birth, until it was too late.[2]

As the number of seemingly random raids attributed to the Widower continues to grow, King Vinter Raelthorne IV demanded results from the Cygnaran admiralty in hunting down the now-infamous blackship. Confounded by the randomness of Skarre’s attacks and faced with increasing pressure from Vinter, the admiralty began formulating a plan to ensnare Skarre with an overwhelming fleet action.[1]

In 588 AR, Skarre personally led a large Cryxian fleet at Windwatcher’s Passage in one of the largest sea battles ever fought by the Cygnaran Navy. Skarre dealt the Cygnarans a major defeat, crippling or sinking more than half their vessels. Her victory opened up the Gulf of Middlebank and resulted in several of Cygnar’s top admirals resigning or being tried for treason. As one of the largest naval battles fought by Cygnar on record and the largest nautical defeat ever suffered by that nation, the Battle of Windwatcher’s Passage would certainly have led to Skarre being noticed by the lich lords of Cryx.[1]

After the end of the Scharde Invasions, Skarre and the Widower are increasingly seen at the head of sizable Cryxian pirate fleets. Reports abound during this time from Khador, Ord, and Cygnar of her activities and actions against both merchant and naval vessels as well as sporadic raids against coastal towns.[1]

In 605 AR, Skarre's visions reveal that Iron Lich Asphyxious is putting his own greed for power ahead of the needs of Cryx. She's instrumental in determining that Asphyxious is up to something dangerous that Lord Toruk knows nothing about, and warns Asphyxious' master Lich Lord Daeamortus of the threat. The resulting battle between Asphyxious and Daeamortus tears apart an island, stains the ground black with thrall ichor, and litters it with the bent wreckage of warjacks. Eventually Asphyxious destroys Daeamortus, while Skarre barely escapes with her life to seek out Lich Lord Terminus.[3][4]

Near the beginning of 606 AR, Skarre is confronted in Blackwater by Victoria Haley, the sole survivor of her raid on Ingrane twenty years ago and twin sister to Deneghra, whom Skarre abducted. After a brief, though explosive, altercation, Haley has Skarre seemingly dead to rights and prepares to end the Satyxis in retribution for the annihilation of her hometown. Skarre parleys for her life by informing Haley of Asphyxious' plan within the Thornwood: if Asphyxious opens a portal to Urcaen, he will wield the power of a god. Haley spares Skarre's life and makes her way back to the mainland.[4]

Skarre joins Terminus when he marches on the Temple Garrodh in the Thornwood to put an end to Asphyxious’ ambitions. Although this battle is ultimately a success, it is won at great cost: in defeat Asphyxious invokes a spiteful revenge that banished Terminus from Caen even as the temple begins to collapse.[5]

Following the defeat of Asphyxious, Skarre works with the Witch Coven of Garlghast to open a portal between worlds, restoring Terminus from his supernatural exile. Recognising her true potential, Terminus accepts Skarre as his vassal and entrusts her with the command of the entire Cryxian fleet.[6]

With her leadership over the combined Black Fleet, Skarre commands a major assault on Port Vladovar. Her fleet cripples or captures many of Khador’s finest warships, deals a staggering blow to its naval strength, and inflicts considerable casualties and damage to the city. The strike on Port Vladovar coincides with other Cryxian movement further inland, sowing terror and uncertainty across Khador as word of their fleet’s defeat spreads.[6][2]

Skarre spends the next months terrorising the western coast until Terminus calls her to Point Bourne, after Lich Lords Malathrax and Venethrax discovered a new, previously hidden athanc. Arriving via riverboats on the Dragon's Tongue, Skarre receives orders from Asphyxious to stay on the river and wait for the athanc convoy as it passes though the Thornwood and the Wythmoor in Ord.[2][7]

In the Wythmoor, Skarre joins Terminus and Malathrax against a Cygnaran army converging on the athanc transport. She is nowhere to be found after the Cygnarans defeat Terminus and seize control of the athanc from them, presumably having been lured north to Ord by Kara Sloan.[8]