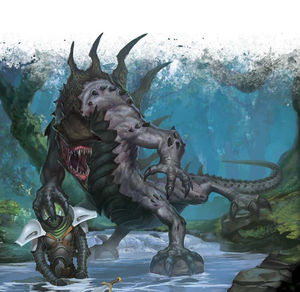 The teraph is the most patient and silent of Everblight's dragonspawn. They used to serve as guards for Everblight's lair in ancient times; now they are an essential element of the Legion of Everblight’s defensive formations.

While Everblight laired below Morrdh, the teraphim served as his guards. They lurked underground to attack any intruders. Everblight used them in his ancient alliance with the lords of Morrdh by sending them against those who had been marked for death.[1]

A teraph is serpentine, six-limbed and boasts a poisonous barbed tail. While lurking in the ground, it accumulates sulfurous and acidic fluids in its gullet that erupt in black fire and blighted ash upon exposure to air.[1]

The teraph's incredibly keen sense of smell allows it to locate any living creature within a hundred yards. Even underground it can sense enemies from their footsteps to emerge from the earth with astonishing speed to ambush them. Teraphim are strategically placed like living mines along known troop routes, where they wait to sow terror and confusion.[1]